When Evie was a little NICU baby, the nurses and doctors started mentioning something called "stridor" when talking about her breathing. I didn't really know what that meant, but I knew that her breathing was noisy and kinda sounded like that of a Canada goose.  We thought it was actually rather cute.


Laryngomalacia is the clinical term for a floppy voicebox.  The tissue over the top of the voicebox is floppy in children with laryngomalacia, and the folds of this tissue come together and vibrate when the baby inhales.  This makes a harsh or high-pitched sound.  It can also cause problems with eating and swallowing, as the floppy tissue can interfere with liquids going the right way.  Evie had a bronchoscope down her throat during her g-tube surgery so they could confirm that there were no other issues further down her airway.

Thankfully, kids with laryngomalacia usually grow out of this by 18 months of age.  There are those with severe laryngomalacia who need surgery and other interventions, but 99% of kids get better with time.  We often get asked if Evie ever turns blue. This can happen with kids with laryngomalacia because of the obstructed airway, and thank GOD that this has never happened to her.  There is a great site at Coping with Laryngomalacia that describes more in detail and provides great resources and support.

Evie was diagnosed with mild laryngomalacia, but still had trouble eating.  Besides the holes in her heart causing her to be extra tired when eating, she also had to cope with aspiration from the laryngomalacia, which is when liquid can go down her airway instead of her esophagus.   She would choke and sputter (and still does sometimes) when drinking her milk.  She also could not coordinate her suck and swallow very well (although she has a very strong suck).  All of this can lead to an oral aversion, so we are very careful when we feed her.  If she cries out of frustration or fear that she will choke, we stop feeding her and give her a break, and then try again when she is calm. I pray every day that she will not develop an oral aversion, because that will set us back quite a bit in weaning her off the g-tube.

On a happy note, Evie does not sound like a Canada goose as often anymore.  And she has been eating much more by mouth in the last couple weeks.  When I say "much more," I mean that she drinks almost 2 ounces at a time by herself, which is like nothing to other babies her age, but we are very pleased with her progress.  I have heard of kids being weaned off the g-tube in 2 months and others in 3-5 years.  It's up to Evie, but I am definitely hopeful that she can be off it sooner rather than later.

So here's to not sounding like a Canada goose anymore, and for all the formula to go down in the right direction!  Go Evie!

Postscript: Evie said goodbye to her Uncle Dave yesterday!  It was fun having him here! 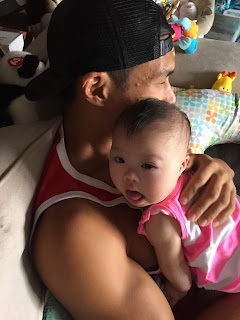