The feeding adventures of Evie

August 26, 2015
Last week, we had 2 big appointments that had to do with Evie's feeding. One was with the feeding specialist for the first time since she was 2 1/2 months old. (So much has changed since then!) The other was with the Enteral Tube GI and Nutrition Clinics.  Evie now weighs 16 lbs! We have worked hard for those thunder thighs! 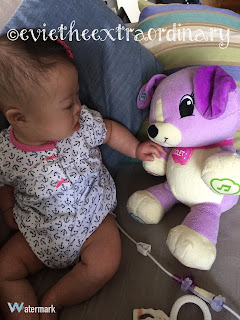 Our feeding goals for Evie include:
1) Drink more from her bottle so we don't need the G-tube
2) Eat more solids
3) Don't choke while drinking thinner liquids (i.e. we are still thickening what she drinks)

When you go to the feeding team appointment, you're supposed to bring your child hungry.  Evie didn't seem to mind that she hadn't eaten in four hours. Those are not my genes!  She also decided to show the feeding specialist that she was not interested in her bottle. A head turn into my armpit was her message to us!  Perhaps because 4 people were watching her while she ate. I wouldn't like eating either with 4 people watching me intently.

Then we put her into a chair to eat some solids.  Evie then decided to cooperate. She ate her sweet potatoes and happily closed her lips around the spoon. This sounds basic, but it is quite a victory. Kids with low muscle tone can have more trouble coordinating closing their lips around the spoon, bringing the food back into their mouths, and swallowing. Evie said, Sweet potato? No problem!  (But she hates green beans!) 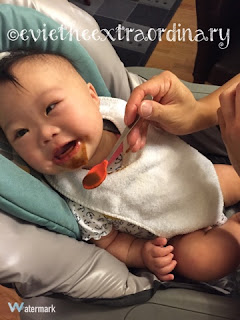 One of my biggest questions was whether we could transition her to another way of drinking because she just isn't great at the bottle.

The speech language pathologist (SLP) reached into her magic cabinet and pulled out 2 options.

The first one was a sippy cup called the Tilty Cup, which she said is out of production.  I thought the SLP was going to tell me how awesome it was and then I couldn't have one. The reason it is awesome is because it is like a sippy cup with a hard spout, but it has a slanted inside so that the baby doesn't need to tilt her head back to drink. This is important for Evie, who hyperextends her neck when she is tired.  Evie thought it was really fun to bite the spout, and maybe sipped from the cup once.  Lucky for us, we get to try at home, because our SLP gave us one!  However, if you are sad, I am happy to say that they are not out of production.  Evenflo decided to start making Tilty Cups. They are available on Amazon.

With this Tilty cup, Evie did just ok. The milk came out too fast from the holes and mostly ended up on her bib.

Then Evie's shining moment came with the straw cup.  It's a Rubbermaid flip top straw container that you can squeeze to make the liquid go up into the straw. The squeezing is key, so Evie learns that there is liquid in the straw. Evie actually sucked from the straw the first time she was presented with it.  The SLP mixed in sweet potato puree with the formula until the formula was thickened. Evie sucked from the straw one more time and then decided she was done with this, but we were encouraged.  I was really amazed that she knew what to do. 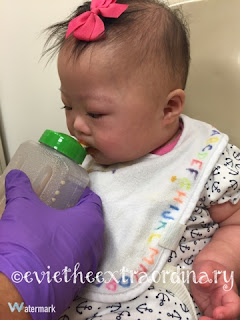 My gut was that Evie just isn't great at the bottle and will do better with a different kind of cup drinking, and we just have to figure out what it is. It might be the straw cup! She still needs thickened liquids for now, mostly to slow down the rate of the liquid flowing towards her, but we are making progress!

As a side note: Many kids develop an oral aversion with their feeding issues.  Some of them have NG tubes, which are feeding tubes through their nostrils, and some are not allowed to drink by mouth due to severe aspiration.  We are immensely thankful that Evie doesn't have an oral aversion. Some of it may be due to her daddy's love for clean teeth, and how he brushed her "teeth" with her banana toothbrush from very early on.  She loves having her mouth brushed with this banana toothbrush and water.  I highly recommend it!


I have great hopes for Evie and the straw drinking.  Then we can do less and less with the bottle, which is my arch nemesis.  Evie, keep eating and drinking!  It is up to you to keep practicing and get off this g-tube! Love, Mommy.