A little overdue, but Evie is 2! I don't know where the time went. I have to say that I much prefer Year 2 over Year 1. Year 1 was filled with anxiety about her health, oxygen tanks and feeding tubes, and going to numerous doctors' appointments. Year 2 was more about watching her grow in so many ways, and getting to enjoy her more.

I swore I wasn't going to do anything for her birthday after last year's wedding birthday party, but Uno's did a great fundraiser that weekend for the Massachusetts Down Syndrome Congress, and donated 20% of the bill to the MDSC.  So we invited our friends to eat there with us!

As she turns 2, here are some FAQ's about Evie that you may have: 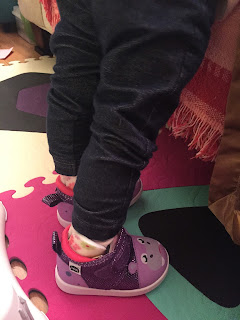 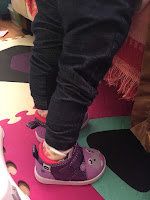 We are looking forward to 2017 with Evie!  We are hoping that this is the year that she will learn to walk and we can say goodbye to the feeding tube!  Wishing our friends and readers a wonderful start to the New Year!

The title of this post is a salute to the Sound of Music, which is one of my favorite musicals.  But mostly it is a list of Evie's favorite things.  Scroll to the end to see how Evie climbs mountains.

I'm always on the lookout for the coolest toys that will help Evie's development, so hopefully this will help someone else.

The #1 favorite is Violet.  Since she was a baby, Evie has loved this toy. First for the light on the dog collar, then for the music, and now for the ability to press buttons and change the music like any independent toddler would want to do.  She likes the sound of music for sure!


One of Evie's favorite books is Click Clack Moo.  This book makes it's own reference to the Sound of Mooosic, and it's awesome!  Other favorite books are Guess How Much I Love You and the Pout-Pout Fish.  Lift-the-Flap books are irresistible to Miss Evie. Here's a trio of books that she loves: Chicka Chicka Boom Boom, Dear Zoo, and Click Clack Moo! And a bonus tip from Evie: "Daddy Kisses" is something she likes to read with her Daddy over and over!


As we work on teaching her about food, Evie has 2 sets of food toys that have been helpful.  One is a Melissa and Doug wooden set that comes with fruit that you can "cut" in half as you separate the velcro with the wooden knife.  Evie likes to pull the fruit pieces apart.  The other is made by Learning Resources, and she loves putting the food in the basket.


Evie is learning to draw.  I wasn't aware that she knew how to hold the crayon to actually make a mark on the page, until we were sitting at Elephant Walk with my colleagues, and she drew on the menu with the crayon she was given.  So if you eat at the Elephant Walk in Cambridge anytime soon, and see crayon marks on page 3, that is a very special menu you have there. Now that I know she appreciates the mark of a good writing implement on paper, I got her short markers like these:


A surprise gift that she received for her upcoming 2nd birthday (!!!!) was the Fisher Price Sit n' Stand chair.


Evie likes to open and close the seat on this chair.  That is her new skill lately--opening and closing whatever she can get her hands on.  This means that she crawls into the bathroom when we're not looking and lifts the toilet seat up and down, and then closes the door on us and sits in the dark until someone comes looking for her and opens the door.

Evie's love affair with the iPad is still ongoing.  I had to get a different kind of case for her so that it would stand on the table while she is sitting, so that she doesn't slouch over and look at the iPad on her lap.  The one below is the latest one, and seems to be working pretty well, when she agrees to keep it on the table instead of her lap.


This next item is something that I was scared to get due to space issues, but in the end I am so happy I got it.  Evie loves to read books--and loves to take them out of the box.  Having her own book shelf keeps the book somewhat neater and less chaotic, rather than all in a bin.  This one is kid-friendly and doesn't overwhelm our living room. It's also on super sale right now!


Evie has been practicing holding a crayon and knowing that it makes a mark on the paper.  I didn't realize that she had progressed in this skill until we were sitting in the Elephant Walk restaurant and I handed her a crayon, thinking she would wave it around as usual.  The next thing I knew, I looked at the menu in front of me, and Evie had left her mark on the menu.  That's when I knew it was time to upgrade to markers--Evie-sized markers.  She seems to have taken to these quite quickly.

Ok, now it's time to share with you Evie's mommy's favorite thing.  The Instant Pot.  It is literally a game-changer when you are a busy mom or someone who gets home from work and doesn't have time to cook, and didn't defrost any meat the night before.  It is a pressure cooker, rice cooker, crockpot, steamer, and yogurt-maker all in one.  Oh, and you can make cheesecake in it too.

I've already gotten many of my friends to buy it, and now they are converts too. I was afraid that I would blow up my house at first, but now I am completely sold on the ability to take frozen meat out of the freezer and combine other ingredients, and still have dinner on the table in an hour by just pressing a few buttons and walking away. Mind blown.

So now that we've gone over some of our favorite things, that brings me to how Evie has been climbing mountains...

...mountains of pillows. We are working on her core strength and her ability to strengthen her legs. The Occupational Therapist said to build pillow mountains to make her climb over them, and she has taken to this if there is an incentive at the end. An incentive like the computer and phone cords that are on the end tables, supposedly out of her reach. She will gladly climb over pillows to get over the sofa arm and launch herself onto the end table just to look at the cords and pull at them. But she's definitely getting stronger! This week we will pick up SMO's, which will strengthen her ankles so that hopefully she will learn to walk sooner rather than later!

Here's to an even stronger 2017 for Evie! We wish you all a very Merry Christmas and a wonderful 2017!
at December 19, 2016 No comments:
Email ThisBlogThis!Share to TwitterShare to FacebookShare to Pinterest
Labels: books, bookshelf, click clack moo, favorite toys, violet
Newer Posts Older Posts Home
Subscribe to: Posts (Atom)