July 28, 2015
Last time we did a swallow study, Evie was about 4 weeks old. She had to fast for 3 hours and she let us know she was not ok with that. She screamed all the way to the ambulance and to Childrens Hospital (even though it was across the street, we still had to take an ambulance!).  We held her hand and her pacifier through portholes in the side of the plastic isolette.

By the time we got to the fluoroscopy lab, she was a piece of work--flailing around and screaming her head off.  At that visit, they put her behind an x-ray machine and we could see her little baby skeleton. When she finally got her milk that had barium in it, we could that sometimes she allowed milk down her airway.

And so began the thickening of her milk to "nectar thick." This just means adding in baby rice cereal or oatmeal cereal to a thicker consistency. If she had really aspirated more, we might have had to go to the thicker "honey thick" consistency.

Fast forward 6 months later. We went back to the fluoroscopy lab, this time with our Early Intervention friends, and Evie was smiling and playing with her hands.  So happy that I did not have a screaming baby during the drive and during the testing!  I put her in the feeding seat behind the x-ray, and she thought it was fun and looked around at the 3 Speech-Language pathologists (SLP's), the Radiologist and his 2 residents, our 2 Early Intervention specialists, and Mommy, and smiled at us all.  A 9-person audience to watch Evie eat. 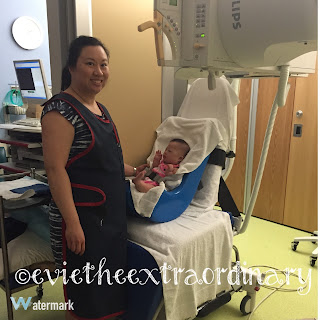 Feeding Evie upright in a car-seat like contraption when she is hungry and behind an x-ray screen is extremely awkward and tough.  The SLP's had a vast array of nipple sizes and and thickeners to try.  2 SLP's watched one screen, another SLP took video of the study, and the radiologist adjusted the x-ray screen and watched the test.  I guess it takes a village during swallow studies too!
Here's how the swallow study turned out:
1. Unthickened formula in a Level 1 nipple: small sips, No aspiration
2. Level 2 Dr. Brown nipple with oatmeal: couldn't get the oatmeal out
3. Level 3 Dr. Brown nipple with oatmeal: No aspiration
4. Sweet potato a la Barium: No aspiration, and swallowed like a champ!  Thought barium tasted icky though.

So overall, yay!  No aspiration!  Now begins a gradual change in her thickened formula every 2 weeks, where we either decrease the amount of oatmeal and/or decrease the size of the nipple opening.   Hopefully she adapts well.

Evie celebrated with a big poop while we were still in the waiting room about to leave.  Mommy thanks you, Evie!

Since the swallow study, Evie's eating has been up and down.  She had a really good week and then the next week decided she only wanted 10 ml at a time.  I don't blame her, because she had to adjust to a different amount of oatmeal and a smaller nipple size.  But 10 ml at a time meant long sessions with the G-tube feeds.  Hoping for a good eating week this week!