Evie's first trip, and the winner of the Peekaboo cards giveaway!

August 10, 2015
This past weekend, Evie took her first plane ride and her first vacation!  Our friends Jerry and Rebecca were getting married in Vegas.

We made it to the airport just in time to get through security, grab something for dinner for the trip, and pre-board.   Evie got her first pair of airplane wings, but was too sleepy to enjoy them.  Evie became known as "the good baby" on the plane, because there was another baby who was screaming the whole flight.  Poor baby and her poor mommy.

One fear was that Evie had not pooped in 2 days, and she usually poops at least once a day. This was a scary thought, since last time she didn't poop for 2 days, there was a huge blowout and poop got all over our new babysitter.  Evie decided to be nice and did not poop on the plane. I had 5 outfits, many diapers, poop disposal bags, and lots of wipes ready to go.

We checked in at the Vdara Hotel. For people with kids, this place is great, because there is no casino (but is next to the Aria and the Bellagio) and has a kitchenette in each room.  We were lucky enough to arrive late at night when they had no choice but to upgrade us to a larger room.  Imagine this mommy's joy when we saw a full kitchen and a washer/dryer, as well as 2 bathrooms and a jacuzzi! (I wish I had had time to enjoy the jacuzzi!)

There were so many new things to see. Evie loved looking out the big window out on the Strip.  However, there were times when she was just over-stimulated.  Too many lights and too noisy.  She definitely preferred the quiet time in the hotel room. 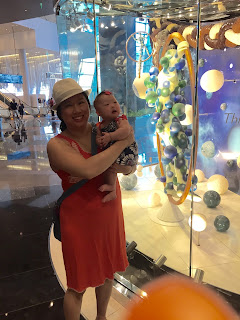 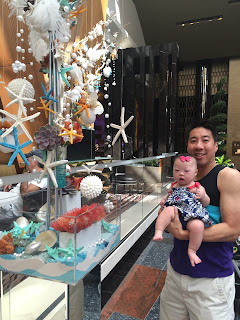 We ate at the Aria buffet for brunch and the Bacchanal buffet at Caesar's palace for dinner!  I do NOT recommend eating 2 buffets in 1 day...well, maybe I do. It was a good food day.

While Daddy was being a groomsman, Mommy and Evie went for a walk in the Bellagio to see the Conservatory and get a crepe for Mommy. 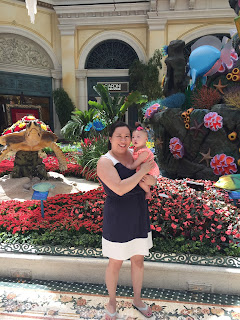 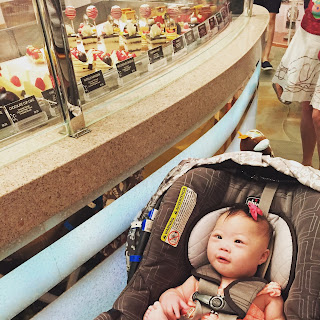 Then it was time to take a shuttle to Uncle Jerry's wedding!  It was 30 minutes outside of Vegas. Evie was once again a good little traveler and we got there without a hitch. 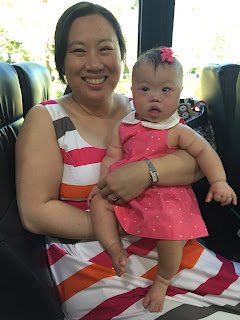 Evie was pretty good during the wedding, although it was something like 104 degrees outside in August. The wedding guests sitting next to us were nice enough to insist on fanning her.

Evie decided it was time to go home and screamed during Daddy's toast to the bride and groom. She was lucky she was so cute!

All too soon, it was time to go home to Boston!  Evie again was complimented on what a nice baby she was on the plane.  Good job, Evie!

And the winner of the Peekaboo cards giveaway is...Sarah B!  Congrats, Sarah! Hope your friend enjoys them!