Evie's been trying out some new products. We thought we'd share and maybe someone else will benefit from them too!

We are learning that the weight of food on a child's tongue is very important as they learn to swallow with low muscle tone.  Evie has made some big strides in eating as we gave up on trying to get her to drink yucky formula (in her opinion) and gave her all the Siggi's full milk fat yogurt that she wants (nice creamy weight).  She eats the ones with 4% milk fat, with some purees mixed in.  In the world of g-tube weaning, it's all about getting as much fat in a healthy diet so the child will still gain weight and not need a g-tube.

Our new favorite product is the Travelmate Mini. It solved the dilemma of the Early Intervention shuttle requiring a car seat to take her to play group. You can attach the car seat to the dolly, and then strap the toddler in their convertible car seat, and wheel them away.  This will not only help us for baby playgroup transportation, but also when we travel with her in the airport, now that we can't use an infant carrier because someone is too tall!  As a bonus surprise, the wheels light up when you roll along.

Evie has developed a strong hatred for the Nosefrieda.  It serves its purpose for cleaning out her nose, but I have to hold her down while she screams like I'm killing her slowly.   This nasal aspirator was suggested as a musical solution that is just as effective. I've only used it once since I got it, but Evie was less annoyed by it.  It plays different songs while you suck the snot from your loved one's nose. Props to our Facebook DS friends for suggesting it!


When we went home for Thanksgiving, I decided to try out this baby Cetaphil lotion, because Evie's cheeks were quite dry and reddened. The almond and calendula oil ended up helping Evie's eczema on her face quite well!


Action shot below.  Evie has all these nice toys, and chooses Mommy's Coach purse. 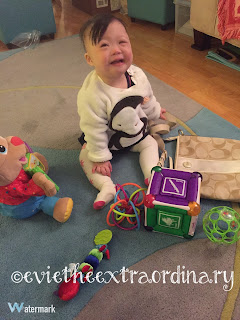 
Violet the Talking Dog does not get old.  Evie still looks forward to seeing her every morning after she wakes up.  Putting her next to Evie while she was eating apparently helped our nanny to feed Evie 23 bites, which is her new record!

Snapfront fleece footed pajamas.  Do you know how hard it is to find footed sleepers that SNAP in 12 months and 18 months sizes?   If anyone finds some in 18 months size, please let me know!

In closing, Evie would like to recommend pineapples.  She loves sucking the juice out of a piece of pineapple.  YUMMY.