Why Valentine's Day cards are extra special to me

February 15, 2018
This year was Evie's first Valentine's Day as a preschooler.  I found out that her class wasn't swapping individual Valentine's Day cards, but that there was an option to put them on the cubbies for each child.  I've been waiting for a very long time to be able to do Valentine's Day cards for my daughter, and darn it, it was going to happen!


I want to share why Valentine's Day cards are extra special to me.  Ever since little Evie was at just 10 week of gestation in my womb, I had to process a lot of fear about what it would be like to have a child with Down Syndrome.  One of those fears was that she wouldn't have any friends.

Yesterday, when she came home with a pile of Valentines, I was pretty excited to go through them.  The ones that unexpectedly most touched my heart were the ones that said Evie's name on them.  My daughter was thought of and included.  Someone took the time to write her name personally (and when you're 3, that means the parents did).   I completely understand that getting valentines done is just another part of parenting when you're busy.  But I want to share how much it meant to me that they took the time to individually address these cards.  They spoke to my mama heart and were just another piece of evidence that Evie will be ok in this big world.

Evie, on the other hand, was most fascinated by the holographic My Little Pony valentine.  Oh well. 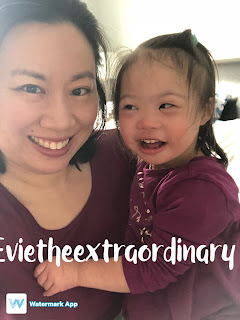