December 30, 2019
I had an unexpected opportunity to have a deep conversation with a 6 year old a few weeks ago.  She came in while I was feeding Evie lunch in a quiet room away from a party.  The chatty girl first asked what Evie was watching, and then did a double take when Evie babbled something in response to the snow she was watching.

“Why doesn’t she talk,” she asked. I braced myself and answered that her mouth muscles are not very strong, and she is still learning how to move them to talk.

“Oh. I’m sad that Evie can’t talk.”  My mama heart felt grateful that she felt the same emotions as I do for Evie each day.  I thanked her for wanting good things for Evie, and assured her (and myself) that one day Evie will speak only a way that others can understand.

I asked Evie something where she answered in the affirmative with sign language.  I then told the girl that this is what Evie signed in order to say “yes.”  Our new little friend was ecstatic when Evie signed “yes” again and she informed me that Evie meant “yes,” as if she knew it all along.

She lugged a big plastic box of kitchen toys over, and when she invited Evie to come play, Evie paused her show on her iPad, put it down, and went to play.  They played cooperatively, mainly the girl speaking to me while I encouraged Evie to explore the kitchen toys. But it was great to see them side by side. 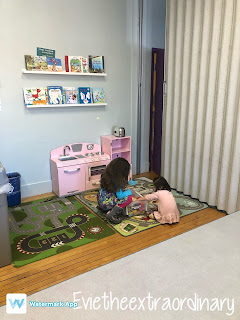 The girl asked how other people know what Evie is saying, and I introduced her to the Touch Chat app on the iPad. I told Evie to say something to her on the device, and Evie said “goodbye.” 😂 But the girl was fascinated and announced, “I really like this! Why doesn’t Evie use it on Sundays in Sunday Scbool?” I told her that the other kids see it as a toy, and it doesn’t get used as much unless the teacher doesn’t understand what Evie is saying. She pondered this, and I could hear the wheels turning in her head. “Well, I think this is great,” she stated. 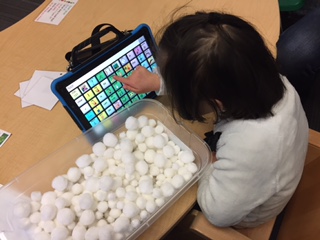 This conversation had me thinking. Evie deserves to have a voice in Sunday School too, but the device shouldn't be a distraction.  We will need to help the teachers to describe the device to the other kids as something that helps Evie talk, and that there would be a no-hands policy.  Inclusion means helping everyone to participate, and my job as a parent is to empower others to help Evie to be fully at the table, voice and all.  I am so thankful for the teachers who volunteer their Sunday mornings, and especially Evie’s 1:1 aide who does it out of love for Evie. She is our partner in helping Evie to participate, and I can’t wait to brainstorm with her.

Leave it to a 6 year old to share some wisdom with me.  I can't wait to see what she becomes when she grows up!