Adapting to travel with a non-verbal tubie threenager.

April 17, 2018
If you don't know what a "threenager" is, the term refers to a 3 year old who already shows signs of being a teenager.   "Evie, you just took Mommy's seat.  Can Mommy sit down and get out of the airplane aisle?"  [Evie grunts and shakes head no.]

As Evie gets older, we run into new challenges that stretch us in our ability to find creative ways to help Evie adjust to new experiences.  The latest new experience was a 6 hour plane trip from Boston to California and back, with the fun stuff in between.

Here are some new insights we learned about traveling with a non-verbal, g-tube feeding, non-walking 3 year old who is curious, feisty, affectionate like a clingy koala bear, and only bribable by iPad time and hugs.

1.  Food transportation.  Evie eats blended food orally, so each week I prepare a variety of frozen foods, blend them up, and freeze them in cubes.  Transporting these for a 6 hour plane ride and then 4 hours in the car (darn LA traffic!!) calls for some forethought.  Here's our food packing list:


2.  Toddler transportation.  Small foldable stroller (we have a Maclaren) and car seat.  The best thing that ever happened to us was this rolling car seat holder.  I can't tell you how many people have commented on the cool factor of this thing.  Worth every penny if you have to lug a car seat.  It carries 2 huge duffle bags really well as you trek through the airport.

3. Drugs and Ear tubes.
I don't actually know if the ear tubes helped Evie that much.  She never had much trouble with pressure on airplanes, but they gave her ear tubes anyway because she had fluid in her ears so frequently.  I hear from some friends in the DS community that ear tubes worked wonders for their kids.

Benadryl is a wonder drug...unless you are Evie.  I really don't know if it helps her. I suspect that sometimes it makes her more hyper, which is a common side effect.  We gave her Benadryl through her g-tube before the flight boarded, but halfway through she got REALLY cranky, and I started to question if Benadryl had made things worse.  I am told that Tylenol could work too--I will try that next time (there isn't going to be a next time for a long time! I need to recover!).

This is Evie's expression when she was asked to take a picture when she arrived in California. Threenager. 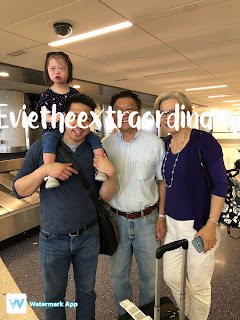 4.  Church.  Most people would think that peppy rock music at church is cool, but not Evie. As soon as we walked in, the loud noise in a big room of strangers and neon lights flashing were visual and auditory overload.  And the only seats available for so many of us was in the middle of the room (we usually sit in the back). Not to mention that there was a guest preacher who had people clapping whenever he said something remotely good, which set Evie off on another fit of terrified paralysis and hiding in my shirt. I put a sheer scarf over her head to try to help, but she was just too scared.  She wouldn't have accepted earphones either.   Perhaps Evie is showing signs of preferring a more liturgical church setting--one in which there is quiet music and no clapping. :D

5.  iPad.  Evie got so much iPad time on our travel day to California, that she got tired of the iPad.  Yes, that is possible.   Thankfully, she now knows how to pick her own apps, so she entertained herself for quite awhile.   A big win this time--she allowed me to leave her bunny earphones on, so that the rest of the plane didn't have to hear "We are the Dinosaurs" over and over.

A big thank you to my cousins who gave Evie a small machine that makes funny noises.  Evie now occupies herself by repeatedly choosing one button out of all 12: the splat sound that sounds like someone is farting.  She presses it, giggles as it plays, and then bursts out cackling after the fart sound.  Then she looks to see if we are laughing too.

6.  Cranky pants.  Evie refused to eat dinner on the plane, but started squirming and crying like her tummy hurt.  This is when I wish I could just throw cookies in her hands and see her joyfully eat junk food treats.  Instead, we had to force her to let us attach the g-tube extension so that we could pump some formula into her so that her stomach wouldn't hurt.  After that, she calmed down, because of course she was less hungry.  She knows the sign for "eat," but still hasn't figured out to use it consistently and link it with her body cues for hunger.
7.  More cranky pants.  I had cranky pants too.  With the ever-present bad weather in the northeast, our plane was delayed until we were landing at 2 am in Boston.  Evie started taking cat naps on top of me, waking up and arching her back (she is very tall now, it takes your whole body to brace her), flopping around to find a good position, and then requiring me to sing Amazing Grace in her ear until she fell asleep again.  Of course, there was turbulence, so we couldn't walk the aisles.  The flight attendant nicely told me that it's better for her to scream and be safe.  At that point I wasn't so sure.  I was willing to chain myself to the galley somehow if I could just rock her while standing up.   My husband rocked her as well, but she is in the clingy phase, and only wants Mommy when she is half asleep.  This made Mommy have cranky pants.

8.  Full-out crying the last hour of the plane ride.  Abruptly ended by the sudden idea to put my phone in front of her face to show her videos of herself.  Instant silence and angelic cooperation.  Why didn't I do this sooner?!

PS, I love my daughter. I just need a break. 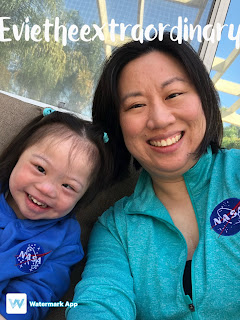