Evie's 2-year follow up with Cardiology was today.  She had open heart surgery at 5 months old to repair an ASD and VSD, and since then, her heart has been strong, and her pulmonary hypertension has resolved.  I celebrate her heartiversary every year to remind us of how far she has come. 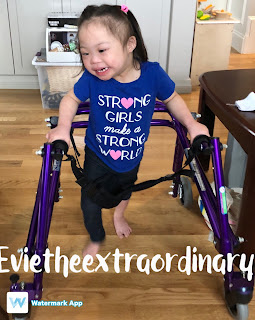 Taking a 3-year old for an afternoon of an EKG, Echo, and Cardiology follow up takes a lot of energy.  Especially when said 3-year-old does not want anyone to touch her.  "Evie, these are stickers!"  Evie did not think that EKG leads and stickers were fun at all.  She would not stop wailing until we took them off.

The Echocardiogram part was a bust.  The technician gave up when Evie start flailing around, even though I had her arms in a lock and my legs around her legs, while my husband tried to hold the iPad and hold her legs as well.  Evie's look of blame when she twisted around to ask me for help was an arrow through my mama heart.

We finally got to see our fave cardiologist, whom we credit with getting us out of the NICU when Evie was 6 weeks old.   "Didn't I tell you the G-tube was a good idea," he asked as usual.  We always agree.  While she still has the G-tube and is working on feeding issues, it is way better than living in the hospital, waiting for her to gain weight.  (I hope this helps anyone who is trying to figure out if a g-tube is a good idea. YES. If it gets your child and you out of the hospital environment after being there for weeks!)

When it came time for him to listen to her heart, I had a brilliant thought.  "I'll hold the stethoscope bell for you and maybe she'll be more cooperative."  He agreed, and then I eagerly applied the stethoscope to her back.  The only problem is that you can't hear someone's heart from their back.   He gently said, "but you might want to put it on her front side or I can't hear."  Face palm.  I'm so used to people listening to Evie's lungs, that I just put it there!  I will be cringing about this for days.

But hey! Evie's been cleared for 2 more years!  We have reached the phase in toddlerdom where specialists just toss up their hands and say, "Well, she's 3.  We'll just wait a couple years until she is more cooperative during exams."  I am looking forward to that day.  She can have all the prizes she wants.

In addition to being cleared for 2 more years, we reached a couple of tiny but cute milestones today.  Up until today, Evie has never paid attention or cared about the fish tank at Boston Children's.  The other children would come and ooh and aah, but she always turned away.  Today, she pointed at the fish and followed them with her eyes.  I was pretty excited. 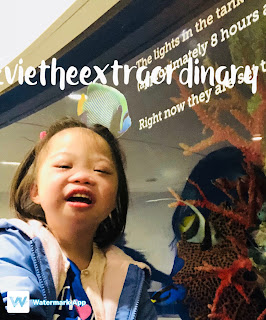 Another milestone was having a diaper accident and being embarrassed about it because she got her favorite armchair dirty.  This might seem silly, but I am so proud that she shows awareness of the consequences of her actions.  She is really so smart.

Today we got to say that we took Levothyroxine off Evie's med list.  For some kids with Down Syndrome, they may have hypothyroidism and then be able to wean off at age 3.  This seems to be Evie's case so far, as she has gone a month without Levothyroxine and had good lab results.  This is the last medication left from her infancy!  The rest is just probiotics and stool softeners!  Go Evie!

On the way out of the hospital, we went by the Prenatal Fetal Cardiology Unit.  When I first had to go there during my pregnancy, all I could think about were the diagnosis of Down Syndrome and that my baby had holes in her heart.  3 years later, neither of these things turned out to be so bad.  My daughter is perfect, and her heart is strong.  I thank God for bringing us through those times, and for making Evie stronger.  Not cooperating during exams is a good thing!  She is feisty and strong!