A Day in Pre-Op

May 29, 2015
Pre-Op day for Evie went pretty smoothly overall.  However, we started the day with much of the county losing electricity right before we were going to take the elevator down to the garage.  Thankfully we weren't IN the elevator when the power went out, but this obviously cramped our style, as we had to carry everything and Evie down 7 flights of stairs.

The morning rush hour traffic in Boston is never pretty either. We were 30 min late for our 7:30 am arrival time, but the staff in Cardiology Pre-Op were so awesome and welcoming when we arrived.

1st stop: Lab workup
Evie, Pepe (feeding pump), and Ollie (oxygen tank) were wheeled down to the outpatient lab.  This brave girl did not make a peep when the very competent phlebotomist put in the needle.  She usually screeches, so I was really impressed. Her assistant kept stroking Evie's head and telling her how cute she was.  Then she asked me where Evie's earrings were. Um...haha.  I told her not until Evie is a teenager.   I know in the Latino culture, babies get their ears pierced, and I said so.  They were very excited to tell me that the reason is that it hurts less when they are babies.  I think now they think that it's an Asian thing to wait until the child is a teenager. Still...Evie will have to earn the privilege just like I did!  To me, it's a rite of passage.

2nd stop: Chest X-ray
Evie got laid on a humongous table bigger than most kitchen islands.  I undressed her and then put her on a little platform where the technician put on the x-ray plates.  While I wore a protective apron, I had to hold her with her arms up tightly against her head, and her head straight.  Evie did NOT like that.  Check that off the list!

3rd stop: Height and Weight, EKG
Evie got weighed (and continues to grow nicely), and got her BP and O2 sats checked.  She also got an EKG.  Evie is so good with EKG's. This time, she was not only well behaved with all those electrodes on her, she was actually giggling and laughing!  We'll take it--whatever it is that is making her think it's fun! 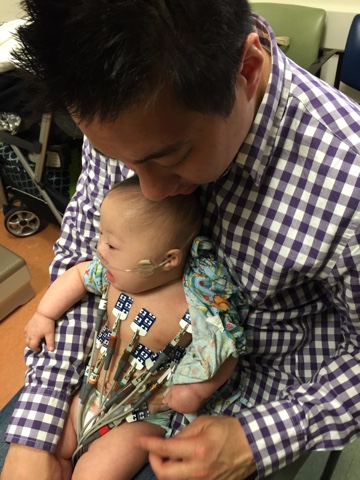 4th stop: Nurse Practitioner
We reviewed Evie's medical issues, meds, and allergies.  Everything seemed to be in order!  At this point my 5:45 am wakeup time started to hit me and I have to admit that I don't remember much about our conversation!

5th stop: Tour of ICU and Cardiac Unit
You have to ask for this. But I was advised by some awesome mommies who have already been through this that we should ask for a tour.   I am so glad that we did.  I think our tour guide was the director of Child Life at Childrens.  She knew everyone! We visited both the Catheterization wing and the Cardiac ICU, because Evie will have a stay in both.  I was impressed with the play room in one of the units.  There were toys for all ages, including babies, and books galore. We are excited to have books at our disposal to read to her.   I was also glad to see what the sleeping situation looks like.  It's looking like my husband and I will have to switch off sleeping in her room.

7th stop (are we done yet?): Consent signing
A physician assistant (I think) went through the catheterization procedure with us, and we signed the forms of consent. We talked about the risks and what would happen the day of.

8th stop: Cardiology Fellow
We love our cardiologists.  They are so responsive, and answer my emails that I write at 1 am in the morning.  We met again with the cardiology fellow (who has 5 month old twins of his own) and talked about the overall picture.  As he said, it is exciting and scary at the same time. But we are on our way to a healthier Evie!

Amazingly, although we were told to prepare for a 6-8 hour day, we were out by 1 pm.  And on our way out, we stopped at the Prouty Garden.  I definitely  want to walk around here to take advantage of it before it is taken away for more clinical space.

Being at the hospital is overwhelming, as much as we are there so often.  It's easy to get lost just finding a bathroom (both Erick and I have gotten lost before!). While the NICU stay when she was born has prepared us a little, this is going to be quite an adjustment.
Thanks for your prayers this week as Evie  goes through quite a lot (as do her parents!).