June 15, 2015
I have to laugh, because yesterday I showed a handful of people my daughter's chest.  I should probably not make a habit of that.  But I am just so amazed at the quick healing of her incision.

Oh, alright, I'll post another picture of how it looks today.  You convinced me. 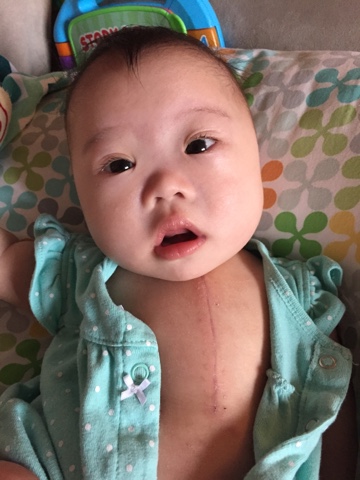 In all seriousness, I want to say how humbled I am when I think of how many people are interested in how Evie is doing.  We really appreciate all the prayers and the encouragement.  People I don't even know told me they have been following my blog, because a friend of a friend told them about it. We are up past 19,000 views, and I'm pretty sure they aren't all from my mom!

I posted a photo on the Zipadee Zip Facebook page of Evie in her hospital bed while snug in her Zipadee Zip, and 690 people I don't know Liked it or left a comment that they were praying for her.  Some of them asked for a blog site so they could read about her and pray more specifically for her.  They don't even know us, but they just want to care for us.  So cool!

Ollie the oxygen tank is also eliciting namesakes.  My cousin's new pet tarantula is apparently named after Ollie because they are both things that we don't want in the house (according to his wife)!  Haha.  Speaking of Ollie, we left him at home this weekend!  The medical supply company won't take him back without an Rx from the doctor to discontinue oxygen, but we had a good weekend leaving him at home anyway!  It was such a great feeling to go into a supermarket with just Evie in her carrier. No oxygen, no stroller, no Pepe, no diaper bag.  It was her first time in a supermarket! 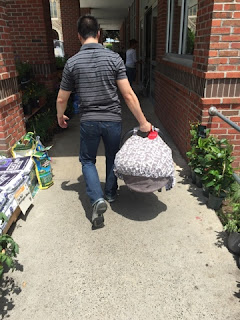 Another neat thing I'm noticing is that friends aren't just asking a general  "How is she doing," but rather a more specific "How is she recovering," or "Did she eat more the last few days."  This tells me that they have been reading my blog, and I don't have to start from the beginning!  I have trouble answering how she is doing, but I can definitely answer specifics about how she is doing with her current goals.

Life is getting back to normal now that we are out of the hospital.  Evie wakes up with a smile these days. She is still drinking more than she did pre-surgery, but still being pokey at it.  She turns her head this way and that, and then all of a sudden will chug 20-30 ml, and then decide she is sleepy or bored.  Ah, the ways of a baby.  She is still trying to clear some phlegm from having the breathing tube down her throat, and I think this makes her uncomfortable.  We are supposed to cup our hand and pat her back pretty firmly to help to loosen up the phlegm.  This is called Chest PT.  Evie seems to like being thumped on the back.

I am also really enjoying dressing Evie in clothes that go over her head.  I know this sounds silly, but before I avoided clothes that went over her head (even onesies) because the stupid oxygen tube would get in the way and it was too much trouble to dress her in them. But now, I can slip things easily over her head!  Yay for fashion plate Evie! (Evie says: Mommy, I don't like it when you put things over my head or on my head.) 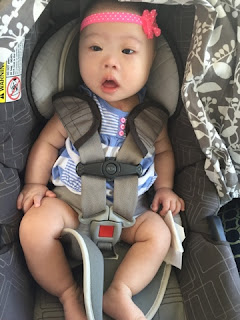