Why is the Itsy Bitsy Spider so effective?

June 17, 2015
Evie has definite musical preferences.  No, Mommy, I will not look at you while you sing The Muffin Man, and no, I do not know him.  But if you sing about that Glorious Spider going up the water spout, I will smile at you and look up into your eyes like you are a genius.

With the same curiosity that led me to look up why Sophie the Giraffe is so awesome, I decided to look up the Itsy Bitsy Spider, also known as the Incy Wincy Spider.

The Itsy Bitsy Spider was first published in 1910 in a camp lore book as an adult song.  Except it was originally the "Blooming Bloody Spider."  I'd much rather have a tiny spider than a bloody and expanding arachnoid, so I will keep using "Itsy Bitsy."  I found all this out from Wikipedia if you're interested.

As one of our good friends (DT) pointed out, Itsy Bitsy Spider is a song about hope, which is why Evie likes it so much.  I did a quick analysis of the note in my head and it's just 5 notes over and over again with a surprising dip at the last phrase.  C, D, E, F, G and a low G.  Twinkle Twinkle Little Star had more going for it with more notes.  Row Row Row Your Boat has similar usage of notes, and yet Evie sticks up her nose at it.  My best guess is that she likes the simple melody and the rhythm and doesn't care at all about the spider.

This brings me to nursery rhymes. Did you know that Mary really did have a little lamb who went to school with her one day because her brother told her to? The moral of the story is to listen to your brother because you may become the stuff of legends.  Baa Baa Black Sheep has its origins tied to a medieval wool tax.  I didn't realize it was so serious when I was singing that!  Anyway, it doesn't really matter what we are singing, because it's the music and rhyming that are helping with Evie's development.  That's a good thing, because half the time I have no idea what the words are!

One thing I do know, Evie stops crying and also eats better when I sing Itsy Bitsy Spider.  Before surgery, she drank 20 ml at a time. Last night, for the first time, she drank 58 ml!  That is a new record!  However, this was when I took her for a brief shopping trip, and she was kind of hot in her  car seat. So it may have been because she was hot.  The important thing to note here is that Mommy took Evie shopping and Evie drank more milk. So Mommy should go shopping more often.  Right? 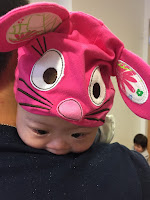